Nothing is more "sticky" than a great soundtrack! Music can stay on people's minds morning, day, and night, eyes opened or closed. And the best part - music can help connect your projects to your audience years and even decades later. (I still think about the Sega Genesis' version of Battletoad's Ice Cavern theme from time to time!)

Sound design is a great immersion tool. It can be critical when creating cohesive, unique and memorable stories or experiences. Unfortunately, it can be quite time-consuming and difficult to find, record, or make the right sounds for the job. And, if a project's sounds are sourced from varying resources, they might not meld well with each other, or the other existing audio elements, causing an overall negative experience for your audience.

Don't let distracting sound design take your audience out of the experience you've worked hard to create. Instead, let's create a soundscape that truly allows your audience to set foot and live in the moments your projects provide. I've crafted hundreds of sounds (and soundscapes) for various projects. Let's make your sound design as polished as possible!

With its wide spectrum of personalities, accents, and delivery, the human voice can take your project from good to great. (To be fair, robot and alien voices might also have a strong impact! ;D) And although finding the right voice can be a struggle, it doesn't have to be.

Whether it's video narration, in-game dialogue, or character voicebytes, let's discuss details of your project and see if my voice (or team of voice actors) can help your project shine as you envision!

Here are a few playlists reflecting commonly requested audio work. Please note that I’m well capable of creating music, sound, and voiceover outside of these demos. So if you’re looking for something specific, contact me! 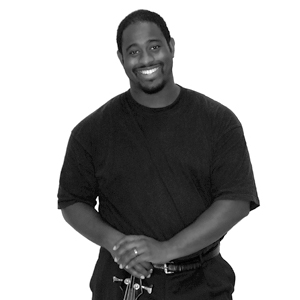 As early as 7 years old I was jamming on stage doing Bell Biv DeVoe covers. Back then my involvement with music was simply finding the beat to groove to. I had no clue that I’d forever connect with music on such an intimate level.

I picked up the bass in middle school and have been playing ever since. Beginning at such an early age gave me great opportunities to learn and grow as a musician, including attending an orchestral workshop at Harvard. In high school I toured Europe with the Kinkaid School band, was selected for the Virtuosi of Houston and American Festival of the Arts, and served as the Principal Double Bass of the TPSMEA orchestra.

At the renowned music college of the University of North Texas, I began producing hip-hop and R&B music while studying classical music theory and aural skills, and taking part in the Men’s Chorus, Symphonic Band and Lab Band. Serving as a recording studio engineer at UNT's College of Music, I learned many technologies that help in my audio endeavors.

I continue to be an avid musician whose musical melodies interrupt my sleep to become realized. I create with passion and research, and you can rest assured that your music, sound, and voiceover needs will be met.

"Just got the file and listened to it with the team! We like it a lot! It's got a very unique theme and groove to it that makes it stand out. It's fantastic!"

"All of the music and sound effects are done by Carl Clark from ccbeats.net. When I talked to him for the first time, he already knew what I wanted and made it into something really beautiful, you will have a chance to hear it when game comes out."

"Thanks for all the research you've put in for our game, as well as your commitment and quality. I'm sure players will also appreciate your efforts. I hope you'll be able to work with us in the future."

"It's nice to finally work with a composer that truly understands our game and its demographics."

"Wow!! This is amazing...I like it so much! I don't know how you did this so quickly and so smoothly. I'm kinda blown away!"

"The atmospheric soundtrack captures the narrative tone perfectly, and is a great companion to the game."

"DAMN! Nailed it! Loved the music right from the email preview."

"The voice you came up with is really nice and fits our character just like we wanted! We listened to your voiceover while playing the game and it seems it'll be awesome! We are really pleased with your job and anxious to see our game running with the voices! Also, the music loops sounded fantastic! Thanks! :)"

"We really enjoyed working with you. Your soundtrack is a big hit with the kids."

"Wow, I'm really impressed by how well you took all that reference and synthesized it into something. I can definitely hear how it belongs! Ok, I know the doc requests a muffling filter on the music... but I think I'm changing my mind on that. The music is too good to muffle!"

"As a very small, commission-based game company, it's difficult to find individuals that understand that a game's success depends solely on the excellence of the people working on it. Carl embodies the attitude of working towards a goal and not just for a profit. He has the ability to portray the vaguest of ideas in his music and capture the feeling and spirit of the scene that the designer envisioned from the start. Working with Carl Clark means not having to compromise what you wanted with what you received, but instead getting that email, listening to that song for the first time and finding out that what you had in mind and what you're hearing now are one and the same."

"Thank you for your amazing music again. It adds so much to our series. I really love how you embellish our work without distracting from the dialogue. It's fantastic!"

"Carl is the composer for my web series, Debt Collectors, and we couldn't be luckier to have him. He always goes above and beyond, not only to make sure the the score is right, but also to ensure the quality and success of the project overall. His music is amazing and he's great and easy to work with, despite the fact that we're in different states. I can't recommend him more!"

"I love the music you composed for our film! I feel so fortunate to have met you. Thank you for taking the time to meet with us in person and brainstorm ideas. You really listened to us and brought our film to life with your music. And to top it all, you did it on such short notice. Amazing! Hope I'm lucky enough to work on more pieces with you in the future."

"Thanks very much for the music and sounds for Crazy Balloon. It has made a tremendous difference to the end product! Looking forward to working with you again."

"Thanks a ton for the wonderful composition work ... extraordinary! You were definitely a key element."

"Carl was a lead musician for my 5 min short film 'The Feast'. As humble, polite and patient as he seems, his work is rather strong and powerful. He listened to all my needs, took deep interest in the storyline, watched roughs second to second and composed just as much as needed for the story. He came up with 3 tracks in a day or two, which is remarkable. They all were so good that I had tough time keeping one and letting go others. Music was a very strong part of my film and it helped enhanced the film overall. All in all, it was a highly satisfying experience working with Carl. I will definitely work with him for my next project. I wish him all the success for his future endeavors."

"I was the editor on a short film for which Carl composed original music. His music was right on in terms of the mood we were looking for. His pieces were powerful and perfectly complemented the film. He demonstrated a sensitivity for the tone and pacing of the film and crafted music that perfectly complemented both, taking time to incorporate the movement of the music to the actions on the screen. He was also gracious working under pressure and produced a fantastic product in a very short amount of time. I look forward to collaborating with him in the future and would trust my projects to him in a heartbeat."